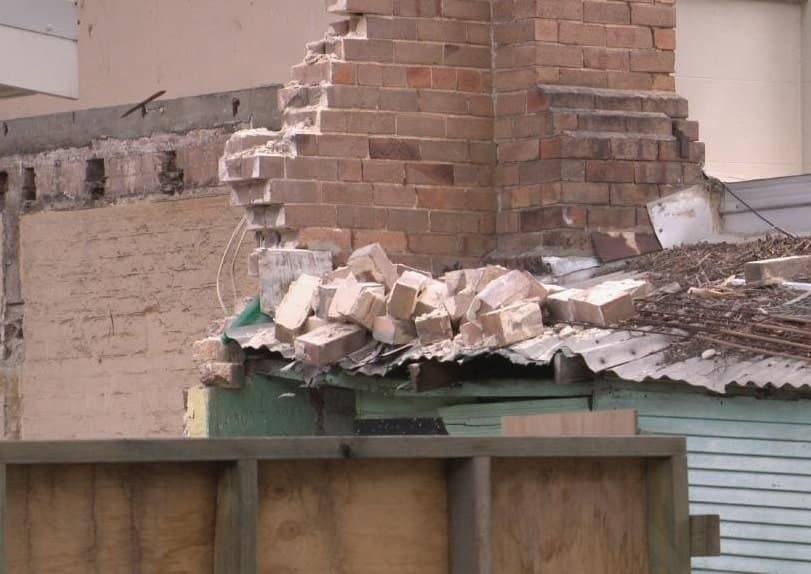 Building collapses are not that common here in Australia, but unfortunately last week, four men were taken to hospital after a wall collapsed at a building site in Sydney’s east. They were renovating a terrace house when bricks fell onto the men. All four men were able to free themselves from the rubble, but two of the workers, one in his 20s and the other in his 50s, suffered serious head and neck injuries.

Apparently workplace injuries involving building collapses are on the increase, and whilst we take safety very seriously in Australia, there’s still more we need to do.

In Nigeria, it seems there’s heaps more that can be done. While searching the ‘net for interesting structural collapses to write about, I found a troubling newspaper article from Nigeria.

Here’s the full report. Some of these sentences are sure to send a shiver down your spine!

Despite past and ongoing efforts by both government and professionals to eradicate ugly incidents of building collapse in Nigeria, the menace stays, going by the eight-storey building under construction that caved in on April 30th in Owerri, the capital city in Imo State, in the south east of Nigeria.

Many professional builders in Nigeria are not happy about the recurring incidences of building collapse in their industry.

They are not happy because their efforts to eradicate the menace in the built environment are yet to yield the desired results.

Their worry has further been aggravated by the eight-storey building under construction which collapsed last Friday in Owerri, the Imo State capital.

The ugly incident occurred at a time the entire housing/ construction sector is still suffering from global and national economic lockdown occasioned by the coronavirus pandemic.

Located on Yar’Adua Drive in Owerri, the structure that caved in left two people dead and eight others rushed to the hospital on April 30.

As rescue operation continues at the site of the collapsed building, death toll had risen to 15, according to a report by the Head of Imo/Abia State Operations Office of the National Emergency Management Agency, Mr Evans Ugoh.

Others rescued from the rubble are receiving treatment at the Federal Medical Centre in Owerri.

This incident has brought the number of building collapses in 2020 to four.

Beamoaning the collapse of buildings in the industry, members of the Nigerian Institute of Building (NIOB) said the increasing number of the unfortunate but preventable cases in some locations had put the nation and the professionals within the sector in bad light.

According to them, incessant collapse of buildings in the country have given builders bad reputation abroad.

They appealed to government, developers, contractors and other clients in the industry to ensure that due process is followed and engage professional builders for the management of building production or development.

Speaking with New Telegraph, President of NIOB, Mr. Kunle Awobodu, bemoaned incessant collapse of buildings in the country, recalling that professionals in Singapore once asked if there were builders in Nigeria going by the number of bad news of failed structures they received.

Awobodu said it would be hasty to mention the major cause of the building collapse in Owerri until proper investigations are carried out.

He said: “If you say the use of sub-standard building materials was responsible by mere looking at the rubble, you may be wrong.

“It is proper investigation that will show causes of the building collapse.”

Also, a former President of the Nigerian Institute of Town Planners, Mr. Steve Onu, who spoke directly from the scene of the building collapse in Owerri, said it would be premature to mention the cause of the incident until proper investigation is carried out.

“It will be premature to speculate the cause of this disaster until a thorough investigation is carried out. But on the face of it , it appears the construction was defective looking at the debris,” he said.

Expressing worry over the menace, immediate past President of NIOB, Mr Kennet Nduka, said that people had refused to learn from history, adding that frequent building collapse scared investors away from risking their funds in housing sector.

According to him, poor building construction is a havoc waiting to happen when people failed to engage professional builders.

He said that builders were trained to manage and oversee building production process.

While urging the investing public to always involve builders to manage building production process, he tasked developers and contractors on the importance of engaging the services of building consultants.

Blaming the incident on the developers, the General Manager of the Owerri Capital Development Authority (OCDA), Innocent Ikpamezie, said they failed to supply his agency with details of the construction papers and approvals.

According to the statement issued by the Chief Press Secretary and Media Adviser to Governor Hope Uzodinma, Mr. Oguwike Nwachuku, the agency requested for papers from the developers weeks before the building collapsed.

Uzodimma assured that the contractor and construction firm would be brought to book after proper investigation was conducted.

The governor noted that the building suffered avoidable structural defects coupled with sub-standard building materials used in the construction by the engineers.

He warned that under no circumstance should such structure be erected without appropriate approval, monitoring and supervision by the Owerri Capital Development Authority (OCDA) and all other agencies charged with such responsibility.

The OCDA boss said that inability to obtain the papers led to the shifting of the date of inspection to Tuesday, May 5, before the building collapsed.

Past incidents of Building collapses

One of the evils plaguing the housing sector in Nigeria is the issue of building collapse.

Recent report revealed that twenty nine people died while 76 sustained injuries from 13 building collapse incidents across the country between February and May, 2019.

The report went further, stating that the state with the highest frequency of building collapse in the country in the first half of 2019 was Lagos. This was followed by Abia, Anambra and Oyo.

Four months to end 2019, Lagos witnessed four incidences of building collapse and a total of 21 deaths.

In terms of injury, the report said that the incidents that happened in the state accounted for 47 or 61.8 percent of the total injuries (76).

Some causes of building collapse include lack of effective control mechanism by government, poor implementation of government’s policy, non engagement of professionals, engagement of quacks to manage production of building on sites, use of substandard building materials, shoddy jobs and poor foundations among others

Minister of Works and Housing, Mr. Babatunde Fashola, had once charged members of NIOB to intervene at the time of construction of any building in any part of the country as a proactive step to stem the incidence of building collapse.

Due process and red tape sure gets in the way of speedy construction in Australia, but we can be thankful we have such processes if the alternative is “shoddy work”, using “substandard building materials”, managed by “quacks” who don’t submit drawings to a regulatory body that doesn’t insist on them prior to construction, that results in ongoing injury and death.

Have a Project that You Want to Discuss?